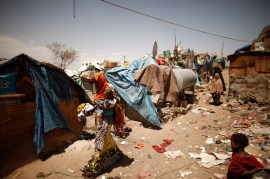 On April 1, 2022, the warring parties in Yemen agreed to a U.N. brokered two-month truce. By April 7, under Saudi and UAE tutelage, Yemeni President Hadi had transferred power to a presidential council uniting forces opposed to the Iran-supported Houthi rebels with a view to facilitate negotiations between the two warring sides. The Saudi blockade on fuel imports was called off and Houthi-controlled Sanaa will be allowed limited commercial flights. The two Gulf countries also deposited $3 billion in the Central Bank of Yemen.

This is a welcome respite for Yemen, which the U.N. terms the world’s worst humanitarian crisis. The war, now in its eighth year, recently escalated. Since January 2022, the Saudi coalition had pushed back Houthi advances in Marib and Shabwa provinces even as mostly civilian infrastructure and facilities in the Emirates and Saudi Arabia came under attack from missiles and drones linked to Iranian assistance. Air strikes by the coalition have hit Sanaa—the main port of Hodeida—and other areas causing significant civilian casualties, a recurring tragedy since 2015.

The toll on the country and its people has been horrendous. In January 2022 alone there were 650 civilian casualties, the highest toll in three years, including a Saudi coalition air strike on a prison in Saada that killed and wounded over 300 people. The punishing Saudi air and sea blockade on Yemen was in its seventh year, with Saudi Arabia’s further restrictions on fuel imports since January 2021 worsening humanitarian conditions. Hardest hit were health and education facilities, which were already in dire condition. Half of Yemen’s hospitals are out of commission and over 2 million children are out of school. The devastated health system and damages to water and sanitation facilities have led to the rapid spread of diseases such as cholera, diphtheria, measles, polio, and dengue. The United Nations Development Program says the war has killed 377,000, with 150,000 directly tied to the war and the rest to hunger and diseases. Most of the dead are children.

Of Yemen’s 30 million people, 24 million are under Houthi rule. The rest are under government control and smaller numbers are under various groups, including UAE-backed groups, which oppose both the Houthis and the government. Some 17.3 million Yemenis need food aid—a number that will likely increase to 19 million in the coming months. Some 7.3 million could be at emergency levels of hunger by December 2022. The World Food Program (WFP) says 5 million risk slipping into famine-like conditions. Around 2.2 million children face malnutrition, including over 500,000 with life-threatening severe acute malnutrition. Some 1.3 million pregnant or nursing mothers are acutely malnourished. Nearly 70 percent of Yemenis—20.7 million—rely on humanitarian assistance to survive. It is estimated that 80 percent of the population lives below the poverty line, with some two-thirds in extreme poverty.

This tragedy is likely to worsen as a result of the war Russia unleashed against Ukraine. Both countries together account for 30-40 percent of Yemen’s wheat imports. For Yemen which imports 95 percent of its overall needs, this will mean higher prices for grains, especially wheat, but also fuel and fertilizers. Food prices in Yemen had already doubled in 2021 and according to the International Commission of the Red Cross (ICRC), they increased by 150 percent since the onset of the war in Ukraine. With the Black Sea effectively choked off and most Black Sea wheat going to the Middle East, the hike in wheat prices will also have an impact on regional stability. Internationally, wheat prices have gone up 25-30 percent since the start of the war and continue at historical highs, with bigger spikes in local markets as in Yemen. Worryingly, Ukraine is unlikely to come back soon as a major agricultural exporter. Planting season is already here, and as a good portion of Ukraine remains too dangerous to engage in farming, many farmers are either fighting or displaced.

The war in Ukraine also means that donor funds will become scarcer even as donor focus on Yemen was already weakening. Germany, for example, will be spending more on defense and Ukrainian refugees and less on aid elsewhere. Just a few months after WFP had to cut food rations for 8 million Yemenis, a March 16 Yemen donors conference pledged only $1.3 billion versus the $4.2 billion requested. Although 36 countries pledged funds, including the U.S. ($585 million), EU countries ($407 million), and the U.K. ($115 million)—this was the sixth year that Yemen’s Humanitarian Response Plan failed to be fully funded.

Saudi Arabia and the UAE, which respectively provided $350 million and $230 million in 2021, did not pledge this year, but the recent truce means that aside from the $3 billion deposited in the now presidential council-controlled Central Bank, only an additional $300 million in humanitarian assistance has been provided.

There are available funds in the global financial system to support needy populations and incentivize peaceful solutions. In 2021, the International Monetary Fund (IMF) approved a new allocation of special drawing rights (SDRs) to deal with the COVID-19 crisis. The extra $650 billion of reserve assets to be injected into central banks is an important boost, especially for poorer countries. However, the vast majority of funds, allocated on the basis of each country’s IMF shares, will go to rich countries that don’t really need them.

There have been calls to deploy these funds to offset food and fuel price hikes in vulnerable countries. One model might be for richer countries to lend their SDR allocations to vulnerable countries via the IMF’s concessional arm, the Poverty Reduction and Growth Trust, at zero interest rates. Other modalities, such as routing these funds to the World Bank’s concessional arm—the International Development Agency—are also possible. While nothing has happened as yet, there are commitments from the G-20 and G-7 to channel $100 billion of SDRs to developing countries. The funding is there, as are millions of vulnerable people—it’s a matter of bringing the two together and lessening the potentially catastrophic impact of Russia’s war on Ukraine on Yemen and elsewhere.