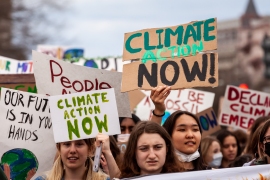 It’s been 30 years since the United Nations Framework Convention on Climate Change was finalized and opened for signatures. Since then, countries have held 27 rounds of negotiations with the goal of implementing policies that will limit the effects of climate change. Nonetheless, carbon emissions continue on their upward trajectory. My new paper draws on the lessons from societal responses to the COVID-19 pandemic to answer the question: How do we get to successful climate action?

Like the necessary responses to stop the spread of COVID-19, the climate crisis requires transformational social change. In fact, early responses to the pandemic, such as lockdowns and travel restrictions, not only limited the spread of the virus, but they also had the unintended consequence of reducing our greenhouse gases. However, both effects were short-lived. The world became accustomed to the risks associated with COVID-19 and individuals resumed more normal levels of travel and social mixing even as the disease continued to spread; to date, the pandemic has killed more than 15 million people globally and carbon emissions rebounded in 2021.

Mitigating the most harmful effects of climate change involves changing the way that energy is used to fuel industrial life as we know it. As the IPCC outlines, an effective response to the crisis involves decreasing our carbon emissions substantially, as well as reducing the carbon that is already trapped in the atmosphere to get us on a path to keep warming below 2 degrees Celsius. The longer we continue with business-as-usual, the more we will experience the effects of climate change in the form of extreme weather events such as hurricanes, droughts, floods, heatwaves, and wildfires.

Given the lack of progress (as measured by tangible emissions reductions, not symbolic policies), there is ample evidence that only a substantial and sustained experience of risk with clear cost to people and property will motivate the necessary reorientation of the state, market, and civil society sectors to limit the worst effects of climate change. This process is what Andrew Jorgenson and I call an AnthroShift. The most plausible pathway from the experience of widespread risk to an effective social response to the climate crisis is social change that is motivated by civil society. Although climate activism has increased in recent years, the effects of this activism on economic and political actors’ behaviors has been relatively spotty and even less is known about the actual climate effects of these efforts in terms of emissions.

A global mass mobilization that employs either nonviolent or more confrontational tactics has the potential to motivate the type of social transformation needed. Nonviolent conflict has been found to be successful in bringing about such large-scale social transformations if a critical mass of 3.5% or more of the population participates in the activism. In other words, if 11.5 million Americans march in the streets, there is a chance that this action would motivate some concessions from policymakers. Beyond responses to repressive and autocratic rule, though, there are very few examples of sustained activism at this level of engagement. Accordingly, it is unrealistic to imagine that this percentage of the United States, let alone the same percentage in numerous other countries, would mobilize and engage in peaceful climate activism without some sort of large-scale disaster as motivation.

Less peaceful forms of activism also could potentially instigate the kinds of radical social change that are needed for a crisis of this magnitude. In fact, calls for confrontational activism are growing. It is worth noting that, even when activism starts out peaceful, disruptive tactics like roadblocks, sit-ins, and human barriers that are not violent can turn violent if law enforcement employs repressive tactics.

Without a global risk event or numerous smaller events that threaten social and economic centers of power and have tangible long-term consequences in terms of social cost to people and property, it is improbable that we will see the level of mass mobilization needed to bring about social change that addresses the climate crisis adequately. At this point, it is impossible to predict if such a shock will come from ecological disaster, war, or some other unforeseen risk, such as another pandemic that has a higher mortality rate than COVID-19. What is certain, though, is that such a shock is required to motivate the reorientation of all the sectors of society to respond in a way that achieves the level of climate action needed.