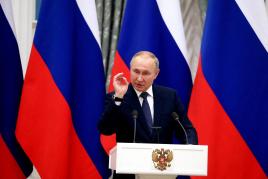 The prospect of a Russian invasion of Ukraine creates a set of problems not encountered since the early Cold War period. These problems do not lend themselves to a typical diplomatic negotiation to find a compromise, nor are they a good fit for the traditional tools of deterrence. An invasion may well occur regardless of the West’s response—but the only chance of preventing it is a “sliding doors” approach to sharpen the choices that Russian President Vladimir Putin faces and exacerbate his dilemmas. This entails a mix of steps that may increase tensions with Russia in the short term, such as new troop deployments to Eastern Europe, and an ambitious diplomatic track to discuss Europe’s security architecture. Some observers have expressed concern that these two elements contradict each other, but they are actually complementary and part of a single strategy—each is necessary for the success of the other.

Let’s start with what Putin wants. He has never regarded Ukraine as a real state and worries about the country’s move toward the West and away from Moscow, which accelerated following Russia’s partial invasion in 2014. More broadly, he has two oft-stated goals. One is to reverse, as much as possible, the Soviet Union’s collapse, something he called the greatest geopolitical catastrophe of the 20th century. The other is to replace a European security architecture based on the equal sovereign rights of all states, no matter how small, with something that accords Russia influence commensurate with its power. Toward this end, Russia has demanded that NATO close its door to new members and roll back military deployments to what they were in 1997.

Hitherto, Putin has been content to aggressively pursue these goals incrementally and below the threshold of major war. Analysts are surprised that he seems to have changed his approach, with an invasion force parked near the border with Ukraine. Some argue that it’s still the same strategy—he intends not to invade fully, but to use the assembled force as leverage. Others argue that he sees a moment of opportunity, with the West distracted and unwilling to resist. Now into his third decade of rule, Putin is looking toward his legacy. Perhaps the right question, then, is not “Why now?” but “If not now, then when?” Ukraine is a prize, not just for Putin but also for Russian nationalism, as is undermining the post–Cold War European security architecture.

At any rate, Putin knows that the West will not fight for Ukraine as it is not a NATO ally, so traditional military deterrence will not work. Yes, the West has threatened massive economic sanctions but little historical evidence suggests that sanctions alone can provide enough punishment to deter a major power from doing something it really wants to do. Moreover, Putin has long pursued national resilience to prepare his country to weather that storm. He has also accumulated leverage of his own—on energy supplies and with his cyber threat—that he can use to divide the West.

Negotiations, on their own, have little prospect of succeeding. The Russian demands are so far-reaching that the United States and its allies could never agree to them or come close to halfway. Even if NATO were to make a statement that Ukraine would not be admitted to the alliance for the next 10 years, it would still not stop Ukraine’s move toward the West as Putin sees it.

The NATO response, which has come into focus over the past couple of weeks, appears to recognize the complexity of the problem. It moves beyond economic sanctions and negotiations to bridge the gap between the two sides over Ukraine. Essentially, NATO is endeavoring to sharply define Putin’s choice, creating two separate scenarios that he will have to choose between.

The first scenario, if Russia invades Ukraine, involves a worsening of Russia’s security environment as Putin perceives it. Call it a “measures short of war” approach. It includes tough economic and technology sanctions, and holds out the prospect of backing an insurgency to drive Russia out of Ukraine. It promises new U.S. Army deployments to Eastern and Northern Europe, potentially including offensive weaponry. It is a world where Finland and Sweden are closer to joining NATO. Russia may end up with control of Ukraine in the short term, but by the metrics the regime uses, it will be much less secure than it is today.

The second scenario, if Russia de-escalates, offers a substantive negotiation over reinvigorating Europe’s security architecture, including discussions on new reciprocal arms-control agreements that could address Russian concerns over NATO deployments in Eastern Europe. It is a world where high-level engagement and transactional cooperation between the West and Russia are still imaginable. Putin would have to give up his ambition of immediately gaining control of Ukraine and collapsing the European security order, but he would have additional influence within the order.

The key is to present these scenarios in tandem. Without an ambitious diplomatic track, Putin could well accept confrontation with the West. And without the prospect of confrontation following an invasion, he would have no reason to give up his goal of controlling Ukraine and undermining NATO. The two go together. Even if one favors greater concessions to Russia over Ukraine, as some have argued, this framework of sharpening the choices would remain essential. Otherwise, Putin could simply reject any concessions as insufficient and invade anyway.

A Russian invasion of Ukraine would be a catastrophe—for Russia, Ukraine, and the rest of Europe. It would destabilize the European security order and the global geopolitical situation more generally. But until recently, at least, Putin appears to have felt that he is in control of the consequences, and that they could work in his favor. That’s why it is essential to shape the strategic environment in which diplomatic efforts take place by pulling back the curtain on what will happen if Russia attacks.