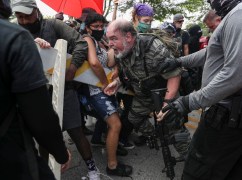 Political polarization, or the “violence of faction” James Madison warned of in Federalist 10, is as great a threat to democracy today as it was in 1787, dividing voters and their representatives into diametrically opposed camps that are unwilling to compromise or yield power to their opponents. Whether polarization is itself the core issue or merely a symptom, its current severity demands study and swift response if we hope to maintain a functioning democracy. The January 6th insurrection on Capitol Hill over one year ago, and the United States’ ongoing struggle to respond effectively to threats such as the COVID-19 pandemic and climate change, warn us of the dangers posed by unchecked polarization.

Together with Professor Robert Axelrod, we recently participated in an interdisciplinary collaboration of political scientists and complex systems theorists to better understand the dynamics of political polarization. What factors drive political polarization among legislators and the public? Is there a tipping point beyond which polarization passes a point of no return? What interventions—if any—can alter the current trajectory from extreme polarization towards more effective, representative, and democratic decisionmaking? Our contribution, recently published in the Proceedings of the National Academy of Sciences, identifies three key mechanisms for avoiding polarization: (1) increasing tolerance, the range of opinions that individuals find attractive; (2) limiting the radicalizing influence of repulsive extremists; and (3) incentivizing non-extremist policies that align with individuals’ self-interests. We also find that external shocks—such as wars, economic crises, or climate disasters—can consolidate individuals’ opinions into less polarized distributions, but only if they are very strong or if they occur before patterns of extreme polarization have set in.

A Simple Model of Opinion Change

Our Attraction-Repulsion Model (ARM) is an agent-based model of opinion change. These types of models formalize assumptions about how individuals interact with one another and change their political ideologies, and then investigate the consequences of those assumptions. In Axelrod’s widely-researched culture model, for example, “agents” can adopt cultural traits from their neighbors so long as they have something in common, but cease interacting after their cultures fully diverge. This seminal work demonstrated that large-scale cultural divergence could occur even when interactions between individuals or communities are purely assimilative—for example, if the U.S. adopted Spanish as its national language to grow closer to Mexico, our culture would likely diverge from English and French-speaking Canada.

The ARM has two rules of opinion change. The first rule states that agents are more likely to interact with other agents that have similar opinions; social scientists call this well-established phenomenon “homophily.” The second rule states that when agents with similar opinions interact, their opinions move closer together (i.e., they attract, as in the Axelrod culture model). Conversely, when dissimilar agents interact, their opinions move further apart (i.e., they repulse). Tolerance is the degree of similarity between opinions that interacting agents find attractive, and beyond which they find repulsive. On the issue of managing federal debt, an individual with high tolerance might find attractive everything from curbing defense spending to cutting taxes to encourage job creation, while someone with low tolerance that preferred raising the debt ceiling might repulse away even from similar views, like those proposed by Modern Monetary Theory.

The Outsized Effects of Tolerance

Consistent with our democratic and pluralistic intuition, the ARM model shows that a society’s level of tolerance strongly influences the trajectory of polarization. Low tolerance among actors causes flurries of repulsive interactions and the rapid onset of extreme polarization, while moderate to high tolerance does the opposite. How, then, do we foster greater tolerance to dissimilar and opposing points of view?

Exposure to Differing Points of View Isn’t Always the Solution

Notions such as “we have more in common than we have differences” or “if you knew me better, you wouldn’t say the hateful things you say” appeal to mutual understanding as an antidote to intolerance. Under this view, we could cure national schisms by breaking out of our homogeneous neighborhoods and information echo chambers to learn from those who are different from us. Our findings do not contradict this sentiment, but they do advise caution: when populations are stubbornly intolerant, increased exposure can exacerbate polarization. We need look no further than Twitter to see how exposure to a wide range of ideologies does not necessarily increase tolerance; on the contrary, social media interactions often reinforce deep divisions.

Even Weak Incentives for Non-Polarized Opinions Can Stem the Tide

Unlike the agents in our model that are attracted and repulsed freely along the ideological spectrum, humans have social and cultural values that act as anchors to positions that, sometimes, serve their own interest. This is especially true when a person’s stake in a policy outcome is clear, such as a small business owner being more likely to oppose tax increases or a schoolteacher being more supportive of funding for public schools. We investigated these “self-interest” effects by assigning a small probability (e.g., 5% or 10%) that an agent forgoes its usual interaction with another agent, and instead moves towards a fixed non-extreme position. Surprisingly, even if agents act in their own self-interest very rarely—once every 100 to 200 opportunities—this effect allows the population to avoid extreme polarization. This is the most promising result of our model because it suggests that if legislators, other elites, and the media could incentivize self-interested positions even very weakly, the moderating effect on polarization would be substantial.

As the saying goes, “the enemy of my enemy is my friend.” Is polarization mitigated—even temporarily—in the face of external shocks such as war, climate disasters, or economic crises? According to our model, it depends. Specifically, crises unite a population only if they occur before the onset of extreme polarization or if the effects of such crises are very strong, overcoming any pre-existing ideological divide. This provides a useful lens for understanding why some crises elicit decisive action while others yield slower, staggered responses—each inheriting their own consequences.

The 9/11 attacks twenty years ago appear to meet both the timing and magnitude criteria, with a less divided United States facing a crisis of immense personal and geopolitical weight against a clearly articulated adversary. In response, Congress voted almost unanimously to expand executive war powers. In contrast, as the COVID-19 pandemic continues to ravage the United States, claiming over 850,000 American lives in under two years, we have been unable—now under two administrations—to mount a coherent national response. Instead of leveraging the National Defense Authorization Act or other federal funding mechanisms to support testing and contact tracing efforts early on, a patchwork of state-by-state public health policies and community resistance to masking and vaccinations indicate anything but unity. Despite the pandemic’s dire health, economic, and educational consequences, our model suggests that its effects are either not strong enough or, more likely, not experienced equally by different segments of our society to overcome existing ideological divides.

If we hope to effectively respond to future crises, we must break the log jam of polarization. Our research highlights the importance of fostering tolerance beyond just exposing people to new ideas. Interventions that focus on empathy and connection, like storytelling, may succeed in bridging ideological gaps where others have caused repulsive backlash. Our model also emphasizes legislators and media outlets’ abilities to weaken polarization by incentivizing non-extreme views, as evidenced by the public backlash against the January 6th insurrection following overwhelmingly negative news coverage. With the 2022 midterm elections on the horizon, it is critical that candidates and the media resist the poison of extremism rather than attempting to gain from it.