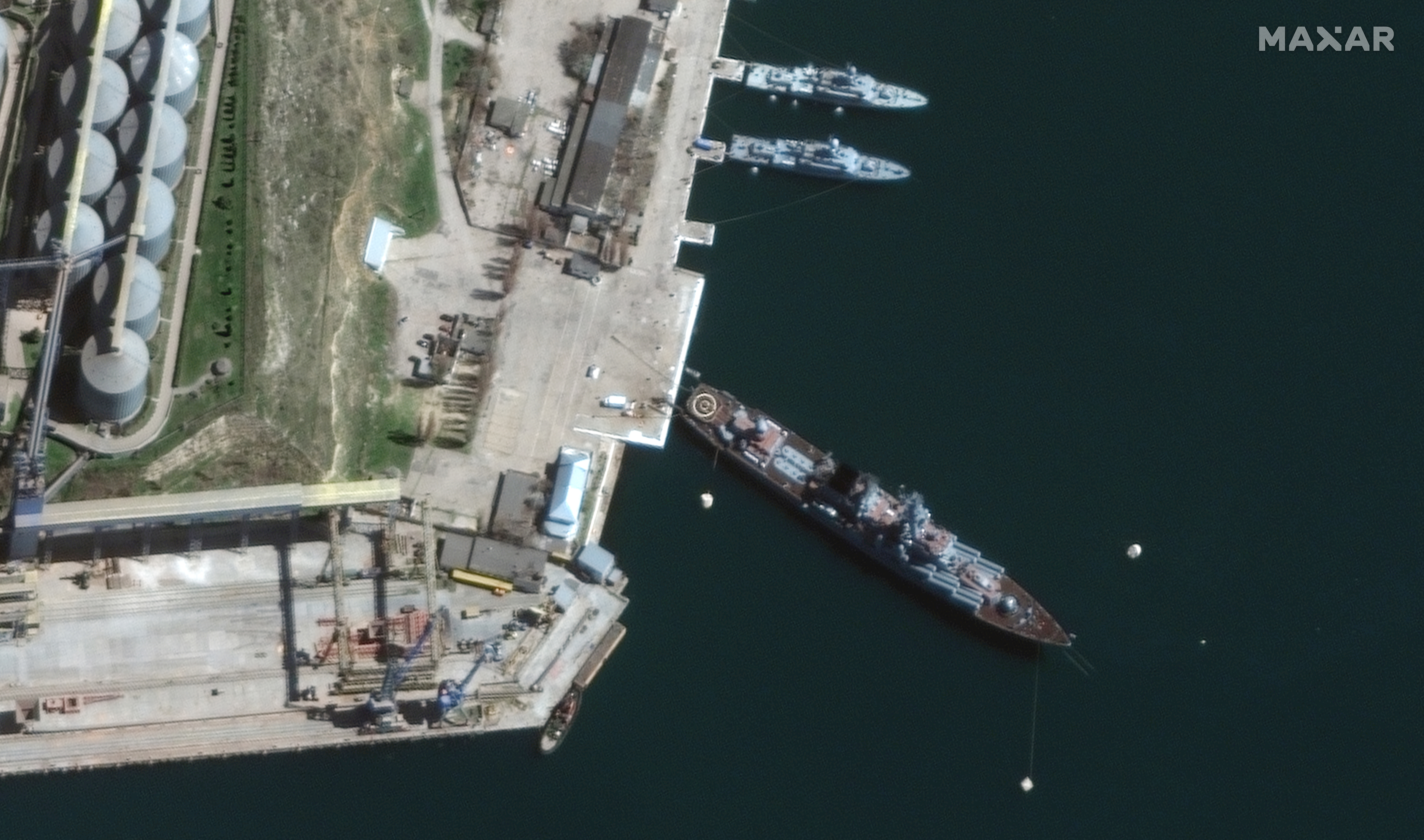 Earlier Thursday, Kirby said the Moskva was operating roughly 60 miles south of Odesa — a Black Sea port city in southern Ukraine — at the time of the blast.

“We know she suffered an explosion,” Kirby said in an interview on MSNBC. “It looks like — from the images that we have been able to look at — it looks like it was a pretty sizable explosion, too. We don’t know what caused that explosion.”

The warship was then heading further east, Kirby said hours before reports about the ship’s sinking began to circulate. U.S. officials assessed it would likely dock at Sevastopol — a Black Sea port city in Crimea, the disputed peninsula south of Ukraine that Russia seized and annexed in 2014.

Russia’s Ministry of Defense said that the warship was “seriously damaged” and that its crew was “completely evacuated” after the explosion, which occurred when “ammunition detonated” as a result of a fire, according to the Russian state-owned news agency TASS. The Russian military said later Thursday that the damaged ship had sunk while being towed to a port, according to The Associated Press.

Kirby, in the Thursday-afternoon CNN interview, said it was necessary to “work on an assumption” that some of the 500 Russian sailors on board were killed during the episode.

“I don’t know how many they got off. We did see indications that there were life boats and that some sailors got off the ship,” he said. “But if it was hit by a missile, even if it was just an internal explosion that cooked off ammunition as the Russians are saying, you’re likely going to have loss of life and casualties onboard that ship.”

In an earlier interview on CNN, Kirby said the explosion was “sizable enough” that U.S. officials “picked up indications that other naval vessels around her tried to come to her assistance.”

Speculating about what produced the blast, Kirby — who is a retired Navy rear admiral — said there are “lots of things that can explode on Navy warships that can cause extensive, major damage.”

“Certainly, it could have been damage from some external force, like a missile or an attack of some kind, a torpedo or something like that,” Kirby said. “But it could also be something that happens inside the skin of the ship — an engineering fire, a fuel fire. You just don’t know.”

A senior Defense Department official said early Thursday that the United States assesses that the warship “still appears to be battling a fire on board, but we do not know the extent of the damage.” The official, who spoke on condition of anonymity, described the fire as “big” and “extensive.”

Oleksiy Arestovych, an adviser to Ukrainian President Volodymyr Zelenskyy’s chief of staff, also appeared unsure of the cause of the explosion. “I don’t really have real information about this, and I prefer to wait and check quietly what sources say,” he said in an interview on CNN.

In his interviews on Thursday, Kirby also addressed media reports that the Biden administration is considering sending a high-ranking U.S. official, potentially a Cabinet member, to Kyiv in support of Ukraine. POLITICO first reported on the internal discussions on Wednesday.

Kirby told CNN he had nothing to announce regarding Defense Secretary Lloyd Austin’s travel plans. But he stressed that “any potential visit” by a U.S. official would have to factor in “security concerns” in the Ukrainian capital, adding: “We certainly wouldn’t do it if we couldn’t meet those concerns.”

Arestovych told CNN such a visit would have both “symbolic” and “practical” merits. He also predicted that the U.S. official chosen to travel to Ukraine would “probably” be Austin, “because the main line of our negotiations right now with the United States is to achieve … [the delivery of] heavy weapons from America.”

Asked on Thursday whether the administration was preparing to send a U.S. official to Ukraine, President Joe Biden told reporters, “We’re making that decision now.”