Editors’ Note: Timmons Roberts and the students in his Climate and Development Lab at the Institute at Brown for Environment and Society, attended the negotiations in Paris.

A sense of measured optimism and achievement emerged from the Paris climate conference. Diplomats, environmentalists, researchers, and other observers mostly felt relieved after years of discussions toward a new international agreement on climate change. Multilateralism had proven it might be up to the task of addressing climate change. But it’s a very mixed picture, and many of us are still trying to weigh the strengths and weaknesses of the agreement, the structure for global action it has established, and the momentum around climate action it created. As George Monbiot put it in the Guardian:  “By comparison to what it could have been, it’s a miracle. By comparison to what it should have been, it’s a disaster.” 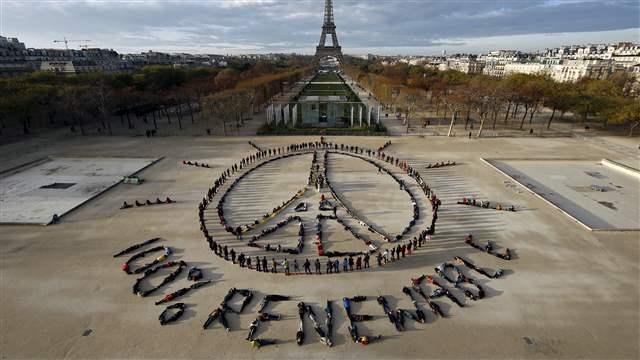 Reuters/Benoit Tessier – Hundreds of environmentalists arrange their bodies to form a message of hope and peace in front of the Eiffel Tower in Paris, France, December 6, 2015, as the World Climate Change Conference 2015 (COP21) continues at Le Bourget near the French capital

One area where Paris was a failure was in sorting out how adequate funding will reliably and transparently flow to help developing countries make the transition to a low carbon economy and to assist them in preparing for the impacts of climate change. That funding is fundamental to these nations acting ambitiously in the years ahead—as we all need them to do. Major funding is also needed to help them prepare for, cope with, and recover from the climate risks that are arriving and which lie ahead.

A vague but important promise

To salvage the tumultuous Copenhagen negotiations in 2009, developed countries promised to deliver $100 billion a year by 2020. The original promise was formalized the next year in Cancun. The promise was that the developed nations would provide “scaled up, new and additional, predictable and adequate funding … [with] a goal of mobilizing jointly $100 billion per year by 2020” to address the needs of developing countries.

There are two parts of the deal in Paris: the main and long-term “Paris Agreement,” and the “Decision” text on how that agreement will come to pass through shorter-term actions. The wording in the Paris Agreement is maddeningly oblique on the Copenhangen/Cancun pledge: “Developed country Parties shall provide financial resources to assist developing country Parties with respect to both mitigation and adaptation in continuation of their existing obligations under the Convention.” It’s not clear which countries (Parties) are delivering how much, and when. The reference to the $100 billion or to any other quantitative target for climate finance is absent, and one would search in vain for clarity in the “Convention,” the original UN Framework Convention on Climate Change drafted in Rio back in 1992.

Developed countries justified this omission by the fact that including binding targets for Parties would have made it necessary for the U.S. Senate to ratify the new agreement—instead the agreement as it is allows President Obama to ratify it by executive decree. The text of the agreement only acknowledged that “Such mobilization of climate finance should represent a progression beyond previous efforts.” So it should rise above past efforts, hopefully above the promised $100 billion.

One area where Paris was a failure was in sorting out how adequate funding will reliably and transparently flow to help developing countries make the transition to a low carbon economy and to assist them in preparing for the impacts of climate change.

Rather, the “Decision document” that lays out how the Paris Agreement will come into effect explained that the $100 billion goal would be maintained “through 2025,” but only “in the context of meaningful mitigation actions and transparency on implementation,” and that by 2025 they would set a new goal. This is weaker than expected by developing countries who see the $100 billion as a “floor” to be surpassed immediately upon its being achieved by 2020.

It actually gets worse. In the absence of a clear internationally agreed definition of what counts as climate finance, and of methodologies to measure it, many debates continue on what levels of funding are actually flowing to developing countries for climate objectives. This foundational effort needs to be completed before finance flows will build trust.

The Decision text (again of less importance than the Paris Agreement) calls for the development under the UNFCCC of “modalities” to account for financial resources provided to developing countries. It is a step forward that such modalities were slated in the Decision text to be considered by negotiators in November 2018. Such a decision is long overdue: observers–including ourselves–have for many years called for a robust accounting and reporting framework of climate finance under the UN Convention, which is the only globally legitimate forum for such framework to be developed. However in agreeing to postpone to 2018 the formal consideration of such a framework, Parties implicitly accept that we will continue to live in a ‘Wild West’ of climate finance for the next three years, at least. And “considering” proposed modalities in 2018 does not set a deadline for their resolution.

Is it new and/or additional?

Breaking from two decades of environmental treaty-making, the Paris Agreement did not use the term “new and additional” when referring to climate finance. For developing countries negotiators, financial flows provided for climate action should not be diverted international assistance that would have gone for building schools, roads, or hospitals. The language has always been problematic, since many funds are commingled and because climate issues need to be mainstreamed into the rest of development work. The Paris Agreement acknowledged that the provision of climate finance is to be made in continuation of developed countries’ existing obligations under the Convention. Such a provision implicitly refers to this “new and additional” criterion, but poor countries have lost a battle by allowing this crucial principle to disappear from the text of the new agreement.

The next few years will be crucial in redressing this ‘non-system’ of climate finance. The Paris Agreement offers several opportunities for the necessary changes to happen, but we need to take them.

Other areas also represent a backslide from previous decisions agreed by UNFCCC Parties. For example, there is no reference in either the Paris agreement or in the decision taken by the COP to “innovative” finance sources–such as taxes on aviation, on international shipping fuels (bunker fuels), a tiny levy on international currency transactions, or a global carbon tax. These internationally raised, managed, and spent funds are some of the only tools available to assure that climate funds are indeed additional to earlier foreign assistance or other budgets, and that they are adequate and predictable. They also can make climate funding much more sustainable politically, since the money should not have to flow through national government coffers.

Big elephants in the room

Even more troubling is the explicit rejection of any kind of liability and compensation for climate impacts due to big polluters. The question of liability has always been the “elephant in the room” in climate negotiations, even when the UN Framework Convention on Climate Change was first drafted back in 1992. High emitters and rich countries have now made it crystal clear: they won’t pay for the damage they cause to vulnerable populations due to their disproportionate use of the carbon space in the atmosphere. Some of these issues may become clearer in Marrakesh at the 2016 negotiations, but it could be several years more before we see how risk will be spread and irreparable harm addressed.

On a more positive note, the agreement “encourages” Parties not formally defined as developed countries under the UN Climate Convention to provide climate finance voluntarily. This is a big deal, though it may not seems like one. The world has changed considerably in the past 20 years. Now, middle income countries—like China, South Korea, Mexico, and Kuwait—are encouraged to help poorer countries in their efforts to curb emissions and to build climate resilient societies. China has already pledged $3.1 billion to climate efforts in developing countries, to be delivered through South-South financing.

The need for public and grant-based resources for adaptation also is recognized in the Paris Agreement. But without a clear quantified target, such a provision is mainly incantatory. The COP decision to decide a new collective target by 2025 from a floor of $100 billion per year may be quickly made obsolete by the next ten years of stronger climate impacts. And on the mitigation side, staying under the aspirational goal of 1.5 degrees Celsius is certain to require far more funding than the budget suggests. Trillions of dollars will have to be shifted away from carbon intensive and climate vulnerable investments in the coming decades and toward a new low carbon and resilient economy.

But for the poorest and most vulnerable countries climate finance is key to securing a safer and more just future. To hold developed countries accountable for their responsibility in helping those countries fight climate change, a robust accounting and reporting framework under the UNFCCC is paramount. We take up that issue in a series of recommendations released just before Paris. There is also a dire need to have burden-sharing arrangements between developed countries to assure the provision of adequate and predictable climate finance, another central demand of developing nations that has been promised again and again over the years. If there is no appetite or ability to provide national-level targets for finance, then innovative international sources of climate finance are all the more critical. 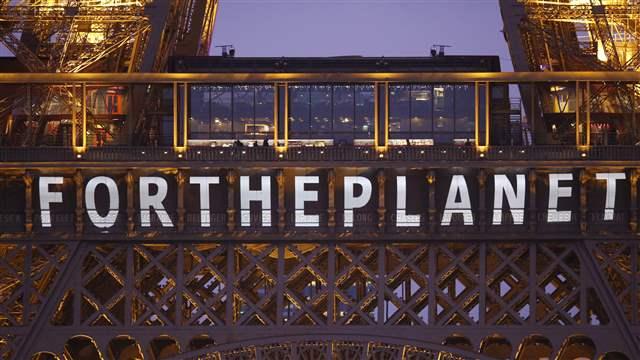 Reuters/Charles Platiau – The slogan “For the planet” is projected on the Eiffel Tower as part of the World Climate Change Conference 2015 (COP21) in Paris, France, December 11, 2015

In the current climate finance landscape, each developed country has an interest in maximizing its claimed contribution while putting up the least cash possible, including through non-transparent and “creative“ accounting, and in putting the burden on other developed countries to deliver on their joint financial commitments. The next few years will be crucial in redressing this “non-system” of climate finance. The Paris Agreement offers several opportunities for the necessary changes to happen, but we need to take them.

Read more about the difficulty in accounting for climate finance in the report Toward Mutual Accountability: the 2015 Adaptation Finance Transparency Gap Report, at www.adaptationwatch.org